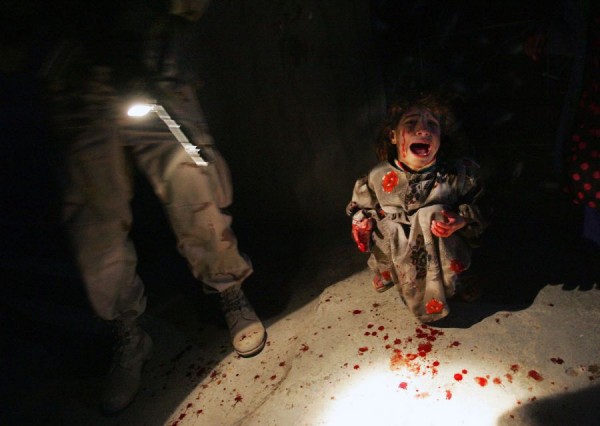 This photograph by Chris Hondros, is a picture of Samar Hassan, age 5. She cried and screamed in horror after her parents were killed in Tal Afar, Iraq, by American soldiers in January 2005. This was a common event in Iraq. American soldiers had check points in various areas and used cryptic hand signals (that no civilian would ever understand) to ask vehicles to stop. The Hassan family were on their way to the hospital, as the younger boy was sick. They had all five children in the back seat. The American soldiers started firing into the car. They killed the mother and father and injured one of the boys. American soldiers were fearful of suicide bombers and used their guns and the right to murder Iraqis liberally. I believe these were their orders.

Samar is now living with relatives in Mosul Iraq. She is afraid to look at this picture. You can read more about her here.

The image of this poor Iraqi girl crying with her parents blood splattered all over her has been with me since I first saw it. I can’t shake it… The way the soldier is standing next to her is also frightening. He’s still holding his gun. He has not approached her to help. He stands there, indifferent to his own murder, indifferent and numb to what he and his fellow soldiers have done. 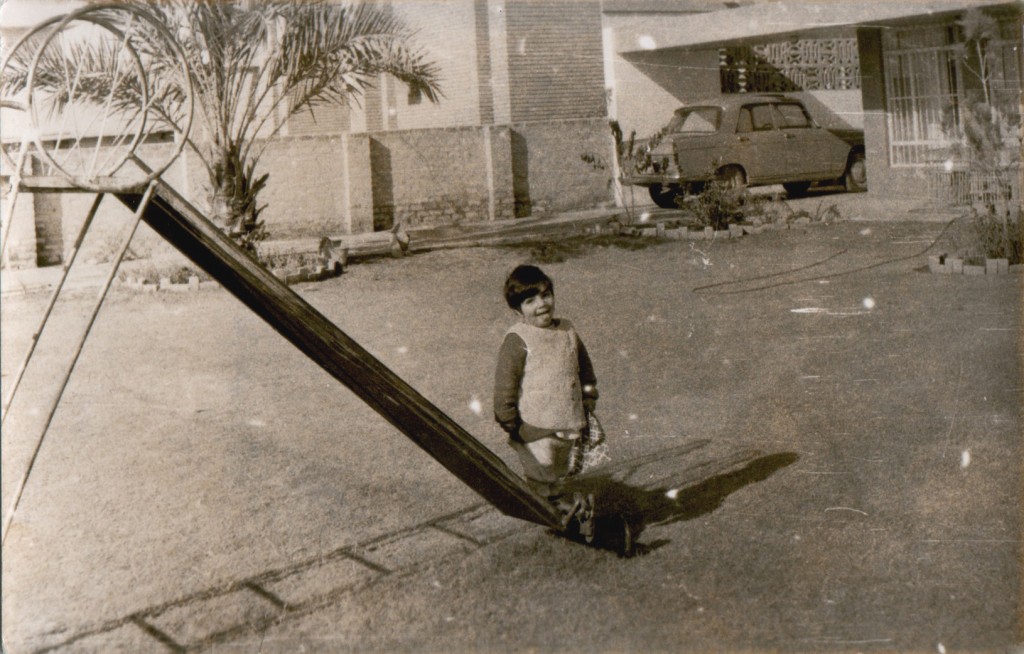 I’m from Baghdad. I was born there and lived a restless childhood there. When my father moved us to the United States we would still visit Baghdad almost every summer and spend time in my grandfather’s house in Al-Mansoor neighborhood. My father would also take me to the religious area of Kathmyia. In the narrow streets of this older part of the city  I would see horse carriages and smell the scents of spices, roasted chicken, oil, meat and dark teas and coffees swirling around my head.  My father would hold my hand and take me to the goldsmith, who would make a golden ring for me with my name in Arabic carved into it. This was a magical time for a kid. My sisters and I would sleep on the roof during hot summer nights in Baghdad. This was common in Iraq. You would lay in bed under cool sheets, staring at the stars and moon as the night air soothed you to sleep. In the morning teta, our grandma, would have tea and fresh tomatoes, eggs, warm khubz (bread) and dibis (date syrup) with gaymer (cream from buffalo milk).

These were good days, even though Saddam was making life difficult for many Iraqis, including my father. We moved back to Iraq. I was in 4th grade. We tried to have a life. Problems with the Ba’ath party forced my family to move to the city of Basrah, in southern Iraq. We bought a house, I had a dog I loved dearly. I went to school. Then the Iraq and Iran war started in September, 1980. I was ten years old.

I remember the day clearly. I will never forget it. My sisters and I came home from school and my father looked frantic and nervous. He had bought large quantities of food and canned meat. I could hear a siren outside that never got closer and never drifted away. It was a siren of war. That night we felt and heard the bombings. Those bombings continued every night. And every night I was convinced it was my last day on earth. Nobody could help me, not my father or mother. I could see the fear in their eyes.

Eventually we left and I had to leave my beloved dog behind. My tears were directed at missing my dog, but they were tears for everything I left behind. When we were ready to leave, my mother asked what I wanted to take with me, and I said nothing. I left my books, my toys and all my stuff. It seemed like I should just leave it there and go.

I would day dream of my dog and what had happened to him. I would miss my bedroom and the life we left behind. I was happy to be away from war but missed something far deeper that I left behind. We moved to Saudi Arabia, Jordan, United Arab Emirates and eventually we returned to the United States permanently.  Before I even graduated high school my parents were divorcing.

In the late 80’s I was a young man trying to find his way. The restless nature of my past translated into restless teen years. I traveled all over the United States… what was I looking for? A home? When the Gulf War started I felt strange. Why was the United States attacking my homeland? What did Iraqis do to deserve this? After years of sanctions against the Iraqi people, under the presidency of Bill Clinton, it felt like nobody cared about Iraqis. Saddam Hussein, the United States and the rest of the world all seemed to be punishing Iraqis.

We would hear from relatives. Communication was spotty. They talked in code. Who was able to leave and who was not able to leave Iraq. We wanted our relatives to be safe, to be free. We wanted to see our friends. We missed our Iraq but we wanted Iraq to come to us.

I lived my life. I moved to Chicago. I finished college, studying art and film. I met a beautiful and talented woman from Kansas. Kristie and I married, we went on our honeymoon in 2003 and the United Sates attacked Iraq again. I remember thinking, ten years ago around this time, I need to return back to Baghdad. I had a camera. I had no money, but I was determined. Afraid but determined.

That story about my return is documented in my first documentary feature titled Nice Bombs. Our trip and my thoughts about Iraq at the time is also documented with a blog that my wife and I wrote while we were in Iraq. You can read it here.

When we arrived in Baghdad early 2004 there was a sense of excitement and hope. This is not a good time, they would say to me. Wait a few years and it will get better. But there was hope. Saddam was gone and Iraqis felt like they finally had a say, that they could speak freely without fear of death or torture. But a new evil was rising. The United States and the soldiers that treated Iraqis like second class citizens in their own country. Uneducated, small minded US soldiers were carrying big weapons and aiming them at Iraqi doctors, writers and engineers. Who were these trigger happy kids that came between Iraqi citizens and their homes? Is this the alternative to Saddam? Where was the freedom and liberty?

I remember after a few days of being in Baghdad in early 2004 I was sitting in my uncle’s Kamil’s yard and I felt this inner calm. Even though there were bombs and darkness, I felt at peace. My feet were on the ground of my home. My birthplace. Something I have not experienced since I was a boy. This is my real home, I remember thinking. This is my city. But just as I felt this inner calm, I also could feel the melancholy sweeping in, knowing I could never really live here again.

But it was enough to feel that. Just to remember that this is where I came from. This is where my nighttime dreams return to and this is where it all started. Forget the politics, forget Saddam Hussein, forget George W. Bush, forget them all. In the end, it is what we all did to Samar in that picture. We all wanted something from Iraq. Everyone debated and fought and yelled about what was best for Iraq. Contractors, armies, governments, expats, Iraqis, Kurds, Shia and Sunni all fought for power. Did anyone really have much of a say in what went down in Iraq? But what does Samar care? She lost her mother and father at the hands of soldiers. What does she care that this photo is now an iconic symbol of the war? What does it matter to Samar?

Iraq is always on my mind. Most everyday of my life I think about Iraq. What could have I done? I try and show my film, to tell people about my family, about our story. I remind them of my cousin Tareef and how he has endured and survived.

Other people have tried to make an analogy that Iraq is like Palestine (my mother’s home) and that Saddam, no matter his crime was still a hero to Iraqis. I reject all of these. Iraq is not Palestine. Saddam was no hero to any rational Iraqi. And when you have to compare your life to the tyranny of Saddam or the chaos and bloodshed of the American occupation, these are not acceptable options for a decent human being.

Iraq needs our  love. What Iraqis need is an apology from the United States government and support. So many of us are displaced and had to grow up in other places. I am also part Palestinian, from my mother’s family. She was born in Jaffa, Palestine. But Iraq is complex that way. We are all Iraqis, no matter if you are Jewish, Muslim or Christian. We come from this ancient land and part of our hearts still reside there.

Ten years of war. Ten years of uncertainty for Iraq. I miss my birth home. I miss many things. But I believe that I will return again and will take my Arab-American daughter Muneera, so she can see where her father comes from. She can feel the history and pride of Iraqis. She will see our beautiful country and the people that will welcome her, that will kiss her and love her, no matter how long she has been away, no matter where she was born.

I think back to Samar. I hope for her future to be okay. I hope she realizes that she was thrown into the darkness of humans and their hatred and wars. I hope one day she forgives all of us. 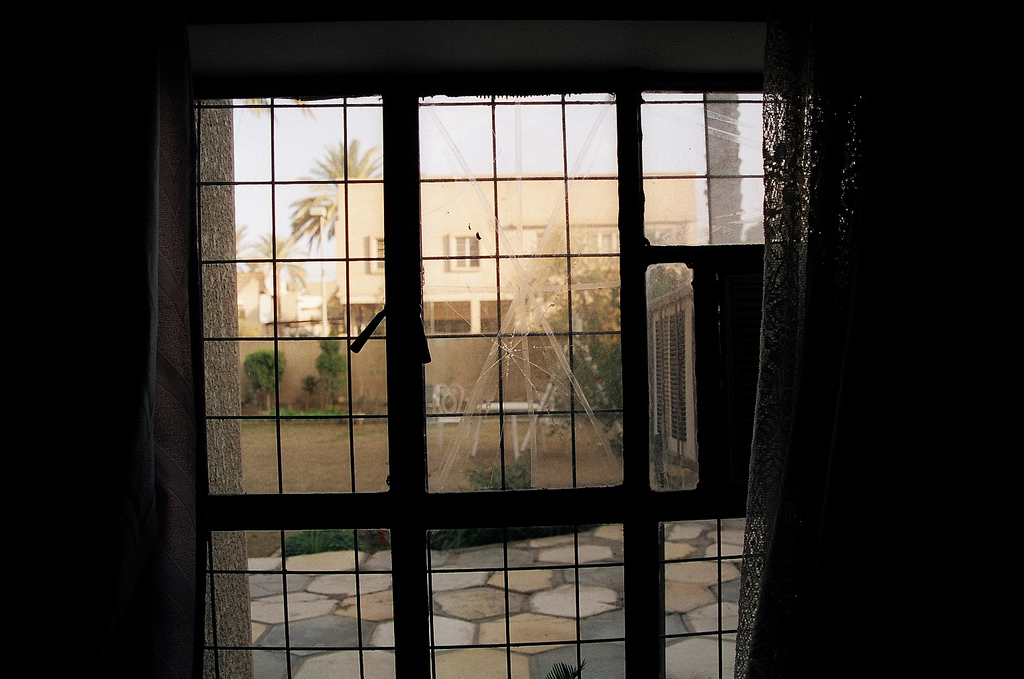