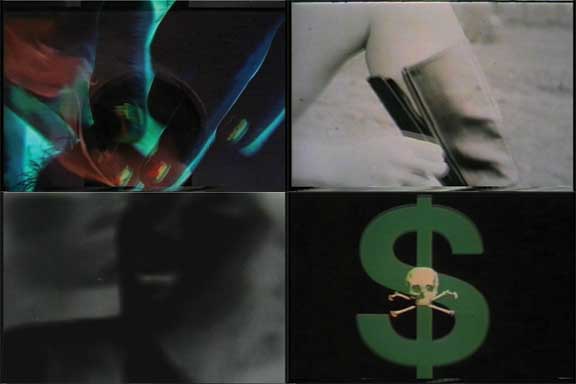 Death Jerk-Off 2000 will be playing on Saturday, March 9 · 3:00PM at The Logan Theatre as part of retrospective selected By Jack Sargeant.

“With the Cinema of Transgression manifesto, Nick Zedd affirmed the relationship between the post-punk underground film scene and transgression. Celebrating the potentialities of crossed boundaries, the manifesto lauded movies that broke rules and affirmed vital existence: ‘There will be blood, shame, pain and ecstasy, the likes of which no one has yet imagined. None shall emerge unscathed.’

Linking the underground and transgression in the popular imagination, Zedd’s manifesto reached far beyond the initial scene it described and influenced a whole generation of young filmmakers to follow their own visions and create their own movies, often regardless of the consequences. This program celebrates those filmmakers whose work engaged with transgression as a boundary-crossing affirmation of unconscious urges, directors who wanted nothing more than to poke greasy fingers deep into the fantasies, desires, and horrors that lurk just below the surface, directors who wanted to explore new forms of fetishistic sexual representation, and directors who just didn’t give a shit and wanted to outrage and shock as much as entertain and inform.” (JS)

This rarely seen short is an exercise in fun by the director best known for the features Red Spirit Lake and We Await.

Mixing together a cow and a cult leader to create a nightmarish babbling beast that has a special plan for the world.

Audiences still watch in utter shock and disbelief anytime this – perhaps the best of Botko’s culinary movies – screens. Perhaps one of the most profoundly unsettling (and all the better for it) works made.

A cut up exploration in film-kink and video-noise fetish for the children of the millennium.

Chicago-based filmmaker Hejnar has carved a unique cinematic reputation thanks to the depth of his unsettling visions and obsessive fascinations. Here he creates a work that echoes with an unsettling imminent darkness.

The true story of the killer, told in a unique fashion.

A great, greasy, slop of meat sauce, gravy smothered flesh, pounds of meat, a few eggs, and forbidden desires all converge in this joyous celebration.