On March 20, 2003 the United States began it’s “shock and awe” invasion of Iraq. Usama and I had been married for one year and ten days. It suddenly occurred to him that, with the Ba’ath party dismantled, he could return to his birthplace in Baghdad. Now, after receiving political asylum and then U.S. citizenship, he could go back and see his family who had been living there under harsh sanctions and a brutal dictatorship. My husband came out of the shower and said that he heard a voice in his head telling him to go and it would be ok. It was kind of a crazy reason to jump into a war zone, but somehow I trusted that voice too. I told him I wouldn’t let him go alone. 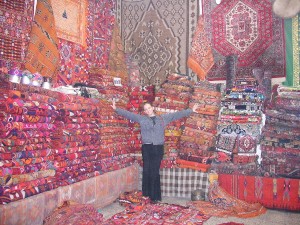 By January 2004, Usama and I found ourselves walking the streets of Baghdad. Our families in the U.S. didn’t want us to go. Usama’s mom was so upset that she temporarily disowned him. And as I breathed in the air thick with kerosine and gasoline, and nervously eyed the tanks and hyper-alert soldiers as they went searching for car bombs just a block away, I wondered just how I got there and why I was being so casual. Journalists wore bullet proof vests. I was in a jean jacket, shopping for DV tapes and mementos to take home.

When I heard the first massive explosion my instincts made me duck and then run for my newly found family in the next room. Usama’s aunt Samaha laughed at me, smiling painfully. She didn’t even budge from her chair. And at that point I realised that this had become the new normal for Iraqis. And that’s when I realised how important it was for us to be there, documenting what was going on for those who had no clue. The stress of it made me terribly ill. 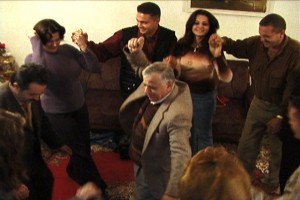 Later Usama and I would be riding in a cab on our way home to our loft in Chicago. The cab driver bonded with Usama over their Arabness, as happened often in that diverse city. Usama introduced me as his wife and the cab driver commented that he couldn’t marry an American girl, because, as he put it, “they can’t take it hard.” Having been to the Middle East I knew what he meant on so many levels. I discovered a lot about my Americanness – about my privilege and lack of understanding – while I was there. The roles expected of women were unnerving to me. I didn’t know that as Usama’s wife there were certain actions I was expected to fulfill, and it led to Usama’s aunt saying that I thought I was “better than” them. Add that to the stress of electricity always going out, perpetually clogged toilets, blockades, curfews, the sound of guns shot in celebration and confrontation, bombs shaking the ground, being barred from certain places for being female, a bunch of socializing and being asked if I was pregnant constantly. No, I could not take it hard. As much as the family tried to make it fun, this was no vacation.

[We chronicled our trip in an on-line blog, found here.]

But what I remember most is the generosity of Usama’s Iraqi family and also how, through it all, they maintained a sense of humor and a sense of hope that things would get better. When I was sick I was attended to by kind doctors within their own homes. Usama’s cousin Tareef and his wife Luma gave up their bed to us for two weeks! We were fed and looked after and shown around like tourists. We were warmly welcomed guests even through the roughest time of our hosts’ lives. And I came away, not really wanting to return to Iraq, but appreciating and loving the Iraqi people, and the culture, so deeply.

So it’s with great pleasure that I’m able to share with you a bit of their lives. It’s my hope that it may solidify your understanding that what we do here – the policies we create, the politicians we elect – have an impact on those other than ourselves. Our country’s violent quest for the Weapons of Mass Destruction was both a wrecking ball, and a moment of hope for Iraqis. Beyond the political upheaval that comes as a result, it is the everyday lives of ordinary people who we tend to forget when when we decide to invade, or “liberate” another place.

Now, on the 13th anniversary of the beginning of the War in Iraq – the war our leaders voted for, and the war we saw plastered on our TV screen daily as some kind of abstract spectacle – we are re-releasing Nice Bombs – My Journey Back to Iraq for streaming rental or download. The voice in Usama’s head was right. We went and we came back fine, if a bit changed by the once-in-a-lifetime experience. And we came back to make an award-winning documentary. But Iraqis are still struggling, and that’s something we need to keep in mind as we watch what was only the beginning of the long road into Iraq.

WATCH THE ENTIRE FILM HERE. Included in your rental or purchase are a number of outtakes from the film, including a visit to a bombed out school where children still attended, as well as interviews with many Iraqi women that had regrettably been cut from the film.

*Nice Bombs is also available as an educational edition for schools and libraries.