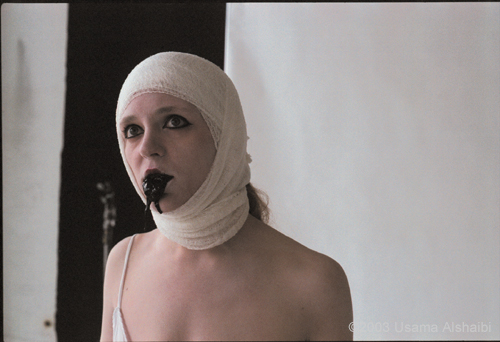 No, I’m sailing in the waters porn than you think to the title, but the art combined with the exploitation of the body. The title of this blog is derived from the collection of short films, between 2001 and 2008 recorded born in Iraq and staying versatile artist Chicago Usama Alshaibi . An artist who is one of the movie screen, but above all in the space of galleries and skvotov. It creates video installations that explore the issue of physicality and sexuality.If I’m looking for the easiest way into his bizarre perversion and obsession with the world, I can not far from the audio-visual treats Solar Anus Cinema (year 2009). Some time ago I had seen his short video Ass (year 2001), which is a collective of Cinema Abattoir placed on the collection of L’erotism (year 2007) and was surprised at the directness and impact strength seen. Manipulated the pictures women butt and your object of worship turned into zavijačeno, repetitive entity, which amends and consolidates the view of mind. Even then I thought that the line that separates pornography from art, extremely thin, the whole being becomes part of your personal taste. Attacks your taste. It also destroys the boundary between aesthetic beauty and aesthetics of ugliness. Usama Alshaibi is re-examines the position and your moral values ​​that this work such as you. In the compilation of the Solar Anus Cinema all items are namely celluloid debt by more than 3 minutes, which they do not offer enough room for choice. Naked female bodies in full force attack your senses and sense of wellbeing. If his films described as pornography, the viewer feel the satisfaction and joy. He felt the excitement and gratification of their primary instincts. A sonic attack in the opposite happens – dominated by disgust, discomfort, and all the spins on the border weaknesses. A hearing is not only your conscience but the whole body. I have long looked so natural cinema, which requires openness, sensitivity and tolerance. At stake are you – the viewer.

The easiest way to compare his work with the master of transgression – a New York legend by the name of Richard Kern . Master ditches and director of apostates and those who do not paint a perfect body, but by trying to destroy and distort. Usama Alshaibi work just that – a picture of naked models and cut them with scars, bandages, wounds and bruises from the blows. Do not celebrate violence – just the opposite. The body appears as a reaction to violence. As a result of something hidden view. His female portraits penetrate the essence of physicality and sexuality. Show women as objects in the universe of viewers and directors – even if they are single entities. Usama Alshaibi is just obsessed with the view that the physical addresses of highly visual fantasy. He is fascinated with the mere physical presence of their designs, which by itself does not touch – They penetrate the bare camera. And that is all you need to make figures from them. And although short films without any story or narrative. View is in itself explodes. Voyeur guilty conscience and leave the audience itself, which it seems as if it were part of the whole event. With such a force is directed to its subject / object closer to his eyes.

For example, take two of the short films. His best known work is probably Convulsion Expulsion (year 2004) which features his wife – a performer and artist Kristie Alshaibi .Feel like being from another planet or dimension, as it is shrouded in puffs and bandages.Androgynous creature, which comes alive at the time of explosion. Metaphorical and real.The director is capturing the moments when her menstrual blood (!!!), slides from all orifices.Contrast that is created between the whiteness of the body and blood redness, discomfort and stress has announced a full assault on your perception of the seen. Penetrate the invisible wall that separates the creator and the viewer. Good thing this is not part of the performance on stage, because otherwise the viewer would become part of the action. Or rather – you will not only withdrew his gaze, but the whole body. Another film that I touched it, the 5-minute eskapada Spoiled (year 2008), which shows the naughty young woman who nažira with sweets and fruit. But really nažira. Whole, this is not run only in the weakness, but reaches the full impact resistance. On the food I never looked like, as I have before viewing this film. I have a high threshold of tolerance. On behalf of the artist but art you can afford all – authorized and unauthorized. The choice remains a matter for your discretion. I will conclude with a smile on your face. Collection of Solar Anus Cinema is complete 50-minute mockumentarec The amateurs (year 2003), which proves thatUsama Alshaibi also addresses the longer formats, as already recorded a couple of documentaries. It is not without humor also demonstrated by The amateurs , which is a kind of fake porn movie. Or quasi-pornographic film recording. So much laughter in my house there was a long time, since the quasi-porn actors and actresses really amateurs who can not grow anything. Whole works like a dirty version of the legendary Czech Is this cartoon! No kidding. Everything they undertake, and even sex, it turns into a comedy confusions which prevail female half, men are far from mačotov – impotent, disinterested and adjacent igrarij. Another proof that what I watch, not pornography, but fine art farce.