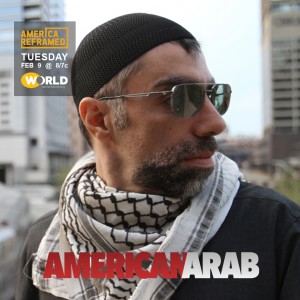 Usama Alshaibi’s documentary American Arab has its national television premiere on Tuesday, February 9, 2016, at 8 p.m. on WORLD Channel, as part of the fourth season of America ReFramed, public media’s newest documentary series. The film, made through Chicago production collective Kartemquin Films (makers of The Interupters), will be available for free streaming on worldchannel.org starting February 10, 2016.

[Click here for to find a broadcast in your area.]

In American Arab, Iraqi-American Director Usama Alshaibi asks “Why is being an Arab suddenly the opposite of being a decent man?” Throughout the documentary, Alshaibi explores what it’s like to occupy the ‘space in between’ as a hyphenated American, specifically of Arab origin, during the surge of anti-Muslim sentiment that arose in post 9-11 America.

“In this film, I wanted to show real people living their lives, and I also wanted it to be something that young people can watch and benefit from,” said Alshaibi. “I think anyone that comes from the Middle East that comes from mixed ethnicity, that has a name that is Muslim or Arab, was affected after 9/11. I shared this story to make some sense of what we all went through.”

Alshaibi offers a path for empathy while rendering a portrait familiar to those seeking and struggling to find their place in America. In a quest for the source of internalized pain in the face of discrimination, he digs and pokes to expose a long history of Hollywood images and media stereotypes of Arab men as sex craved buffoons, angry terrorists, “camel jockeys” and the butt of racist jokes.

The Alshaibi family came to America because Usama’s dad, a professor, refused to work for Saddam Hussein and was persecuted in Iraq. Their mother, Maha, reflects on the irony of having struggled for 10 years to become an American, to offer her children a new country with freedom, and a safe home, only to emerge as the “enemy” when her new country, America enters war with Iraq.

Alshaibi reflects on his childhood, a time when he never thought of himself as having any ethnicity at all. To reaffirm this notion of normalcy, he visits with college buddies in Iowa City who didn’t perceive him radically differently, but at the same time celebrated him for his “exotic otherness.” Later, Alshaibi shares how he became increasingly embarrassed by his Arab roots, and forged a new identity as an artsy teen interested in “hard-core punk, weird film and all things subculture.”

Alshaibi becomes a new father, coinciding with the end of Ramadan, when his daughter Muneera (Arabic for ‘brilliant’) Cinema Alshaibi is born. Maha, her grandmother, hopes the newest member of her family will enjoy a mix of “a new culture”: no hijab, no limits, free, proud of her varied heritage and, with the ability to make her own way.

“AmDoc is thrilled to collaborate with WORLD Channel and WGBH on the fourth season of America ReFramed. As co-producers, we share a passion for storytellers committed to helping us gain a deeper and more nuanced understanding of America today,” says Justine Nagan, Executive Director, American Documentary, Inc.

American Arab world premiered at IDFA, and had its US premiere at Big Sky Doc Fest, before screening at Chicago Underground Film Festival (where it received an special jury honorable mention), Cleveland International Film Festival, Minneapolis / St. Paul Film Festival, and more festivals and community screenings. It is available on DVD and VOD.

America ReFramed is a co-production of the WORLD Channel and American Documentary, Inc. and is hosted by journalist Natasha Del Toro.

Season four of America ReFramed curates a diverse selection of films highlighting innovative and artistic approaches to storytelling from emerging to veteran filmmakers alike. Viewers will be immersed in personal stories from the streets of towns big and small to the exurbs and country roads that span the spectrum of American life. The documentaries invite audiences to reflect on topics as varied as culture, healthcare, politics, gun violence, religion and more. Several episodes feature a roundtable discussion moderated by host Natasha Del Toro with special guest commentators and filmmakers.

In 2015, America ReFramed won a GRACIE Outstanding Series award, and was nominated for an EMMY award as well as an Independent Documentary Association award for best curated series. In its first season, America ReFramed received five 2013 CINE Golden Eagle Awards, and one Imagen Awards nomination.