Usama Alshaibi is studying for his MFA in the “mellow college town” of Boulder, Colorado, along with the likes of filmmakers Phil Solomon and Alex Cox, but the director of “Nice Bombs” and “Muhammad and Jane” is still in the midst of promoting his fine, fierce long-in-the-making family history “American Arab.” “Oh man,” he says when asked about any lessons from its ongoing release. “Identity is fluid and Arabs are still having a tough time in America. But, I also learned that I am comfortable in my own skin. I don’t need to apologize or answer to anyone.” While Alshaibi’s experimental shorts and features can readily be described as transgressive, his current work, co-produced with Kartemquin, earns that label in its own right. “Every time the United States bombs Iraq, it triggers these impulses in me. Of course these triggers have always been there, and much of my early work came from that primal place. There has to be some desire, some rage, some passion that makes me want to pick up the camera and start creating something. I never saw there being a line between my more experimental, transgressive work and the documentaries. A real Muslim Imam in Iowa and his story, in contrast to a fictional Muslim sex worker in Chicago—both of these narratives are interesting to me. In one, I may take a more straightforward approach and, on the other side, I can let go and dive into a psychedelic realm. I can explore moods and tones, something more poetic. I’m comfortable with being called a transgressive filmmaker. It’s who I am. I’ll wear that badge with honor.” Alshaibi’s current projects include “Baghdad, Iowa,” “my nightmare-love project. A fictional home. A place that cannot be found but is. It’s based in real events but dipped in LSD and death.” And Usama and his filmmaker wife Kristie are working on a doc called “American Dominatrix.” Still, despite the identity issues his work is steeped in, Chicago is key. “I would not be who I am today without Chicago. I’ve made life-long friendships in Chicago. From my days at Columbia College to the Chicago History Museum and Chicago Public Radio and my cinema family at Kartemquin Films. And of course the community around the Chicago Underground Film Festival. We all have our tough days in Chitown, but it is the city where I met my wife and really figured out how to live and make it. Chicago lives in my blood.” – See more at:http://newcityfilm.com/2014/10/02/film-50-2014-chicagos-screen-gems/3/ 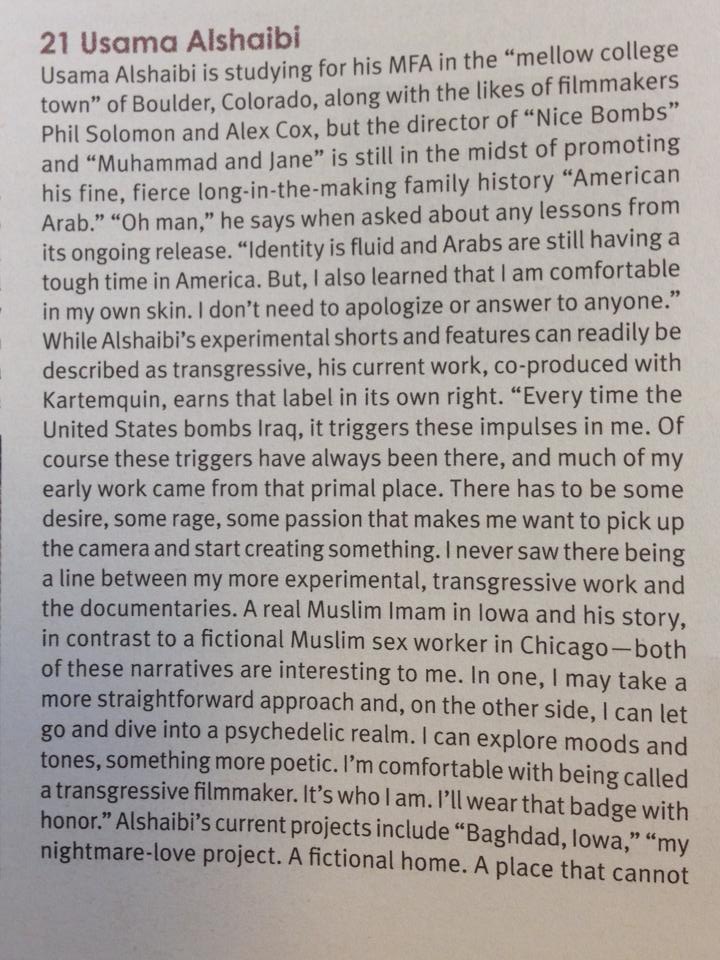