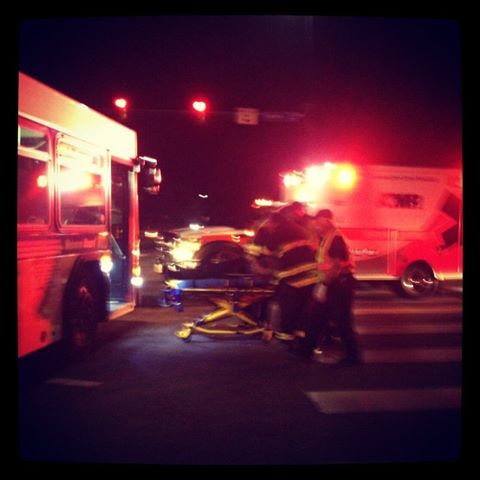 This is what happened. I was taking the 205 bus going home on 28th. The bus was pretty empty, just a few people. As we approached the intersection of Diagonal there was a loud BANG and the bus swerved and the brakes were slammed and the passengers were all pushed forward. A pickup truck could be seen spinning on our right side. The bus stopped. I got up and asked if everyone was okay. People were in shock. There were two elderly ladies, a young couple, a guy around my age and another woman. They said they were okay. I went over to the bus driver and he did not look good. I asked him if he was okay. He mumbled something and grabbed his neck. I called 911. I spoke to the dispatcher, I told her we needed an ambulance and police immediately. I was also concerned since we were just stopped at an intersection and was not sure if the brakes were on. The dispatcher asked me to ask the driver some questions, the driver was not responding and his eyes were closed. I was afraid he was going to die. I asked the lady to please get an ambulance here- and then I heard the sirens and saw the lights. The dispatcher asked for my name. When the paramedics took away the driver, the other guy on the bus said: thank you Usama. That felt nice. And the older ladies shook my hand and thanked me for helping the driver. That was my good deed of the day. Of course my PTSD also helps in moments of crisis.