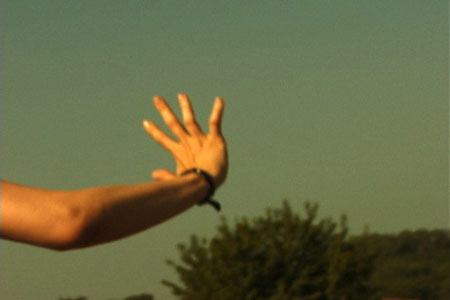 “Like a clip from a horror movie, a pigtailed Kristie runs for her life through a field while the camera races right behind her. The cameraman’s hand reaches out to pull her pigtail. Her panicked gasping lets us know she fears for her life. And like in any horror movie, she falls to the ground and the cameraman is on her, frantically tearing at her clothes. A clear plastic bag goes over her face. And she cries. Her faceless assailant comforts her. But is this a scene performed by actors? Or is this Kristie fearing a scene directed by her husband has gone too far? Who is comforting her? The cameraman “character”? Or the real Alshaibi? This is the kind of film if you found it on your own and didn’t know who Kristie was, you’d think all of it was 100% authentic and not made by a loving husband and wife” -Bad Lit By Mike Everleth

“Usama Alshaibi and Kristie Drew(Alshaibi) continue in the slasher vein with their own Slaughtered Pigtails, a hack ‘n’ slash Friday the 13th style chase scene fragmented down to its sound-bite essentials (Run-Fall-Run-Fall-Turn-Scream-Die-The End). Tactile and frenetic, it achieves startling poetic lyricism when the hyperspeed action is slowed down once the victim is pinned to the ground. It creates a self-conscious empathy for the victim, sadly absent from most splatter films (admittedly enjoyable on their own level).”
– Jeremiah Kipp, filmcritic.com

“Slaughtered Pigtails, besides being the perfect name for some future hard-rock band, is an extremely visceral two-and-a-half minutes of slasher-movie extract.”
-Steve Palopoli, metroactive.com

“Slaughtered Pigtails is a cinematically beautiful film with lush lighting. I think the title speaks for itself. It explores violence towards women in a literal way. The acting is great (wow- that girl can really scream!) which makes it all the more uncomfortable.”
-Anhoni Patel, sfstation.com

“This flick is very little more than jerk-off material for those guys out there who get their jollies by watching fake snuff vids on the internet. A screaming girl is chased, pinned down and then killed. One little cool thing at the end though, is that this killer seems to have somewhat of a kind streak. Believe it, or not.”
–Eric Campos, Film Threat