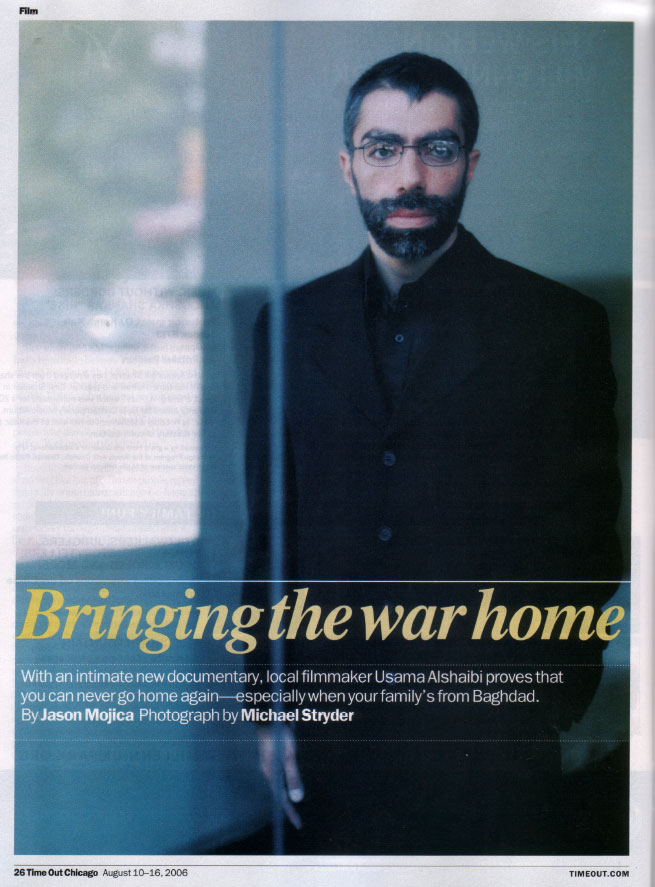 With an intimate new documentary, local filmmaker Usama Alshaibi proves that you can never go home again—especially when your family’s from Baghdad.

When Studs Terkel urges you to do something, you do it. “He sort of put me on the spot,” recalls Usama Alshaibi, who was working at the Chicago History Museum as a sound engineer when his project sparked Terkel’s interest. It was January 2004 when the legendary author and historian came into Alshaibi’s office and asked about his family in Baghdad. Alshaibi replied, “Well, I have this idea about going to Iraq and interviewing my family….” And that’s what set Terkel off. “He said, ‘You have to go!’?” Alshaibi says. “He pulled out his checkbook and gave me my first donation.”

This act of generosity set the wheels in motion for what has become Nice Bombs: My Journey Back to Iraq, a feature-length documentary that makes its world premiere August 17 at the Chicago Underground Film Fest at the Music Box.

Nowadays, documentaries are increasingly taking on the trappings of political stump speeches—witness Michael Moore’s canon, or Al Gore’s recent An Inconvenient Truth. But Nice Bombs comes off more like a good book: Each chapter reveals a new layer of Alshaibi’s complicated relationship with his family—and with the war in Iraq. We are introduced to Alshaibi’s father, Hameed, who has been living in exile for some 24 years. We see Alshaibi’s mother, who has lived in the U.S. for years and vows never to forgive her son for returning to a war-riddled Iraq. And we see a Baghdad beyond the headlines: full of urbane folks sorting out the paradox of finally being free of Saddam but having to endure the humiliation of being occupied by the U.S. But first, we meet the filmmaker himself.

War changed Alshaibi’s life again in 1990, when his resident status expired, and the Iraqi government tried to get him back to fight in the impending Gulf War. Alshaibi instead won political asylum, and in 2003, just weeks after the U.S.-led invasion of Iraq, he became a citizen of the United States.“The Iran-Iraq War sort of handed me my fate—I guess the Gulf War did as well,” Alshaibi says. “I had no choice in any of this—I didn’t choose to leave Iraq, I didn’t ask to come to the U.S. The only choice I made was this one—to go back.”Alshaibi’s father, now remarried and living in Jordan, first suggested Alshaibi return to Baghdad for the first time in 24 years. “As the date got closer, even he was hesitant. One day he’d say we were going, then there would be a bombing and he’d say, ‘Maybe not’,” Alshaibi says. Then there were concerns about whether it would be safe to bring Kristie Alshaibi, Usama’s blond-haired wife. And, as Alshaibi puts it, “We were broke.”

He and Kristie put out a call for help on their LiveJournals and on MySpace, organized an installment of their experimental (and now-defunct) Z Film Fest, and called everyone they knew with money. Benzfilm Group, comprised of Chicago filmmakers Ben Berkowitz and Ben Redgrave, got involved as the film’s producers.

The couple raised $5,000 in two weeks, and eventually found themselves in Amsterdam’s Schiphol International Airport, on their way to meet Alshaibi’s father in Jordan, and from there on to Iraq. Kristie fixed her camera on her haggard-looking husband, who was wondering if they were making a big mistake: “I keep thinking about death…all of us dying in one giant explosion,” he says.

A few weeks later the couple returned with 47 hours of footage that captured a moment in Iraq that, looking back, seems relatively peaceful and somewhat optimistic. Between the time of their trip in January and February in 2004 and the time they sat down to edit Nice Bombs in early 2005, things in Iraq had gotten, well…worse. Nearly 200 people were killed in a bomb blast in Aashurah, four military contractors were killed and their bodies mutilated in Fallujah, radical cleric Muqtada al-Sadr experienced a meteoric rise to popularity, and the Abu Ghraib scandal put U.S. efforts under a microscope. In light of these changes, Alshaibi began to work conversations with his cousin Tareef into the film. Tareef served as the Alshaibis’ guide during their time in Baghdad, and he was a cynic even then. By the time Alshaibi finished editing the film, Tareef was suggesting that the only thing that could save Iraq is another dictator.

After thousands of hours toiling away on the film—watching a beat-up but forward-looking Iraq on their computer screen while seeing an Iraq descending into chaos live on their TV—Alshaibi is finally finished with Nice Bombs. It is a nuanced portrait of a family, of two countries and of resilience. It pulls off the rare feat of being “important” without forcing a political agenda down the audience’s throat.

“Maybe the biggest politicians in America are learning, too,” suggests cousin Tareef by the film’s end, at the same time lamenting that those politicians’ education comes at the expense of Iraq’s future. Alshaibi says that in Tareef’s most recent e-mail, he had downgraded his opinion of the situation to a very bleak, “Iraq is fucked.”