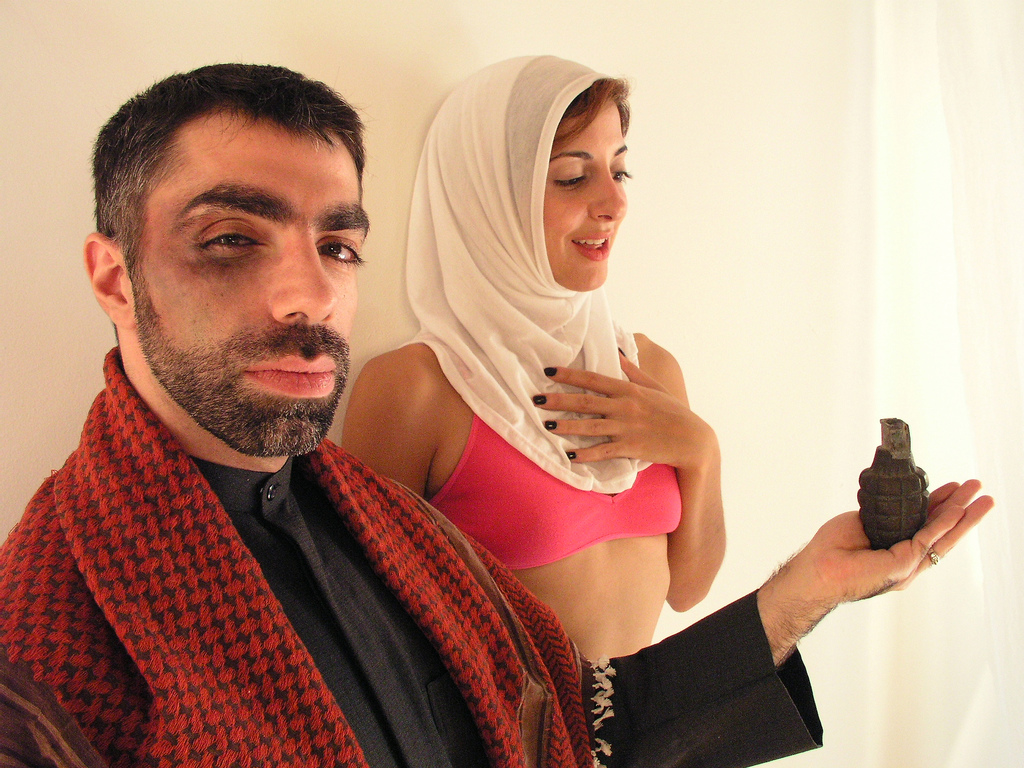 When I was born there were dead bodies hanging off nooses in the streets of downtown Baghdad.

If I were to take two sentiments from my own childhood which have stayed with me, the first would be a hybrid cultural identity and the second a fear of violence and obliteration.  My family travelled back and forth between the Middle East and America’s Midwest. I spent the majority of my childhood in a state of transition, never belonging, always displaced. In some Arab countries I was treated as ‘foreign’ or ‘corrupted’ and in the United States I was viewed as an immigrant and had to struggle to re-assimilate. This sense of displacement and the onslaught of the Iraq and Iran war had a lasting effect on how I viewed the world and on my creative process. It forced me to carve out my own identity and made me open, curious, but perpetually “different.” I was a child in Iraq at the onset of the Iran and Iraq war. I hid quivering in the bathroom as the world around me shook with explosions.  It made me realize that nothing is solid. These structural notions I had of safety and stability started to dismantle through war.

All of these early lessons later echoed in the post 9/11 unease of America and the subsequent bombing of Muslim countries.

Although I had a background in visual art, I felt that filmmaking best suited my mode of expression. In film school we were trained to mimic Hollywood. But I was more interested in the DIY style of underground films that I was watching.  Shortly after, I created a very colorful short film shot on 16mm called Dance Habibi Dance. It was my first attempt at fusing elements of east and west in a psychedelic pop fantasy. I called it “a message from the future,” and this hybridization laid the foundation for my later work.

The immigrant or displaced character is central to my films. In Soak, which was shot in Chicago and Southeast Asia, the main character seems to exist at once in the present, as well as in a moving memory of another place entirely. He has returned from a journey, the momentum from which he cannot escape. This dizzying dream-like state can only be halted by urgent madness. The character uses a small one-chip video camera to both detach from and hold on to the infinite and traumatic now. He is the perpetual foreigner.

In 2002 I wrote, directed, and produced Muhammad and Jane. I shot the film in a cinéma vérité style, using locations like Chicago’s O’Hare International Airport during the height of airport fears over terrorism. The central character, Muhammad, is a Polish Muslim immigrant with multiple illegal passports. His origins and geographic movement call into question the notion of a static cultural identity, automatically rendering him potentially dangerous.

2002 was also the year I finally became a U.S citizen. It was a bittersweet moment as the United States was beginning its campaign to wage war against my home country. I was discovering my voice and exploring my own ethnic background through the technology of filmmaking and the availability of new editing software. By utilizing conventional art and digital animation, I created a short film called Allahu Akbar. In Islam it is forbidden to have depictions of God or the Prophet. Complex, hand-drawn geometrical patterns are used to praise the perfection of God in nature. I began to spin and move these patterns and new images emerged and created an entirely different way of viewing these traditionally static designs.

But with the United States 2003 invasion of Iraq, I felt that I had to take on the role of documentarian. I kept my budget small, and entered the war-zone of Baghdad with my wife and father, equipped only with an unobtrusive video camera. The final product was a very intimate documentary called Nice Bombs.  I chronicled the warm faces of my family in contrast to the face of an American occupation. I took a diary-like approach, telling my immediate story while incorporating the pixels of my past. The themes of travel, war, loss and fear reside in me and haunt my work.

I also continued to explore dark elements of fictional storytelling. My 2004 film called The Amateurs, blurs the line between fictional narrative and documentary. The scene is an amateur pornographic video set, with violent, funny and uncomfortable circumstances for the characters that inhabit it. The film deals with sexual transgression and contemporary anxieties about the racial other. I continued to play with similar themes in my short 16mm and 35mm films, such as Convulsion Expulsion, Gash, Patient and Traumata.

I was also interested in the aesthetic possibility of video. I started to create shorts intended for viewing on computer screens and cell-phones. At the time I was seeing many disturbing images of beheadings carried out by insurgents in Iraq and was curious about how these were used as propaganda tools on both sides of the ocean. My short videos, The Message and My Demands, both toy with the notion of the scary ‘other,’ and the Arab ‘boogey man,’ while also subverting the idea of the superiority of the Western world. In the video My Demands, I’m wearing a ski mask with dark glasses and an Arabic keffiyeh draped around my neck, with a 1970’s Star Wars bed sheet as my backdrop. The character I play is making existentialist threats to the United States, and issuing inane and materialist demands.

In 2011 I completed an unconventional narrative feature titled Profane. For me, this film is a merging and culmination of all my styles and themes. The main character Muna, is a young devout Muslim and a professional sex-worker in the midst of a spiritual crisis. Profane is an attempt to exorcize my own demons. As I grew older I started to identify more as an atheist and was critical of some of the passages in the Quran. But I still consider myself culturally Muslim. The mythology and rituals of Islam fascinate me. According to the Quran, God created humans from clay, angels from light and jinn from smokeless fire.

Jinns are equally good and evil, and it is said that each of us has one of our own. This spoke to me as a powerful metaphor for aspects of my own life and I wanted to create a character that reflected that. I lived for a few years in Saudi Arabia where I became much more devout as a young Muslim. But I was also exposed to other things there. I saw pornography for the first time and would hear stories about orgies and drug use. Keep in mind that Saudi Arabia is extremely conservative as the birthplace of Islam. The coexistence of fanatical religious verve, along with vice, is not surprising. As I wrote the outline of the character for Muna, I wanted her to be a real person but to also embody some of that conflict.

With Profane, I became interested in re-imagining time and space in a dizzying and chaotic experience for both the audience and the film’s main character, Muna. I explore the idea of submission from a religious, psychological and sexual perspective. Profane is The Exorcist for the rogue apostate.

The trope of the interview is no longer relegated to that of the conventional documentary. It has become the common thread between my fiction and non-fiction storytelling. Maybe it was the years spent being interviewed by bureaucrats in the Arab world and by immigration officers in the United States. In my experience, the interview was not a benign process, but something filled with mystery, hostility and intimacy.

The self-consciousness of watching and being watched, of being recorded and participating in one’s own manipulation, creates an inevitable paranoia. This paranoia is heightened if one is an outsider, seen as somehow different – the other. The character of the perpetually displaced traveler, or the foreign person is a persistent motif in my work.

My second documentary feature, American Arab, explores how Arab Americans own their Arab heritage and American identity in different ways, and asks how they see themselves in light of how they are viewed and portrayed by others. What I’m witnessing in the United States is an environment of hostility toward Muslims and Arabs. Islamophobia is the fear du jour. As an immigrant and citizen I feel an obligation to tell the stories of Arab Americans- and the uncomfortable social and political landscape into which they are inevitably thrust. This will be my most straightforward documentary to date.

Although I primarily work as a filmmaker, I believe that any tool of expression can be useful in capturing a common spirit. Instead of aligning myself with any tribal, religious, political or aesthetic allegiance, I would rather live within a conceptual hybrid – a place of mysticism and invention. My soul is shaped by an accepted trauma: from my memories of past wars to today’s warning sirens.

Motion unfixed, in flux, with no obvious resolution – this is an exciting place for me to explore. The notion of the immigrant, the sense of displaced citizen in transition, is becoming a contemporary reality for many of us. With real and imagined fears of global terrorism and an unstable economy, we are all, in a sense, experiencing a state of anxiety and transformation.

My work continues to explore these anxieties of our clamorous society and my position as a citizen inside its construct. I believe that I am struggling as a contemporary archivist to lock down, document and decode my time.  My movies and my symbols are forming and reforming, trying to transcend and find meaning in the darkness.