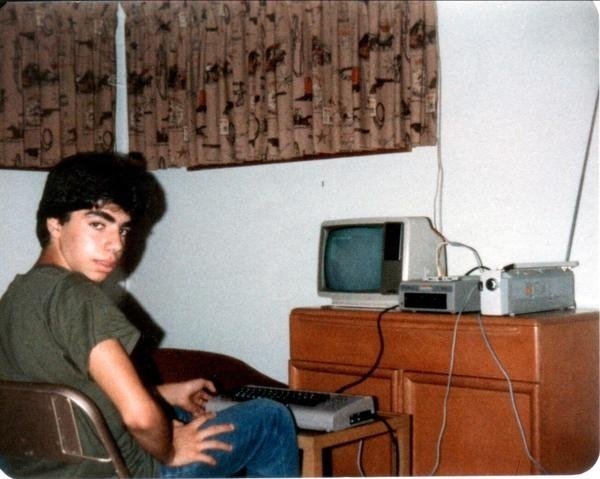 “Who am I?” asks Usama Alshaibi, filmmaker, Iraqi, American, Chicagoan, husband. “That’s a really loaded question.” Born in Baghdad in 1969 to an Iraqi Shia father and a Palestinian Sunni mother, Alshaibi is a one-man contradiction, a walking political talking point and an artist uniquely situated to capture the divisions and conflicts of today’s calamitous historical moment.

When he was five years old, Alshaibi’s family left Iraq for Iowa City, then returned to Baghdad for a few years before the onset of war. They then escaped to Saudi Arabia and finally moved back to Iowa City when Alshaibi was in the seventh grade. During his high school years, he moved back and forth between the U.S. and the Middle East. “Everyone was concerned about dating and I had just gone through hell,” he remembers. “For years, I felt like an outsider. I didn’t know who I was. Not until Osama Bin Laden became so popular did everyone know my name.”

That’s supposed to be funny. While Alshaibi taps into the dark moments of his past—from the anxiety of living under Saddam Hussein to the fear of being deported back to Iraq—a number of his videos reflect a sense of humor about his living culture clash. His celebrated 1999 short, Dance Habibi Dance, for example, is a music-video-style Arabesque disco party that examines “how American pop culture is digested and interpreted in places like Africa, the Middle East, and Asia,” and vice versa: “seeing how Middle Eastern culture is interpreted on this side, and the humor in that.

” The bulk of Alshaibi’s work, though, provokes and confronts, from subversively pornographic shorts like Ass (2001), The Foreigner (2001), and The Amateurs (2003), to the disturbingly political Bombshell (2004), a video collage of Iraqi underground torture videos and Saddam Hussein birthday celebrations. His unsettling 2003 feature debut, Muhammed and Jane, is a haunting black-and-white love story about a fearful Iraqi-Polish man who returns to the U.S. and forges a relationship with a young woman suffering from a similar sense of paranoia.

Alshaibi doesn’t align himself with one specific genre of filmmaking, whether documentary, fiction, or experimental. “My filmmaking can be open,” he says. “I can allow external forces to come in and push me in different directions.”

One such external factor—a big one—was the U.S. invasion of Iraq and the ousting of Saddam Hussein. After 24 years away, in 2004 Alshaibi returned to his homeland to make his latest feature project, Nice Bombs, an account of his two-and-half-week visit to Baghdad with his blonde, Kansas-reared wife. Both an inward exploration of personal identity and an outward examination of a post-Hussein Iraq through interviews with friends and family, Nice Bombs captures the contradictions inherent to the conflict. “Iraqis do have freedom of speech,” Alshaibi notes, “but at what cost. A newspaper editor in Baghdad walks around with guards and a gun. Big difference.”

With support from Creative Capital, Alshaibi is completing Nice Bombs— a title meant to evoke the way Iraqis have normalized violence— in early 2006. Inspired by urban anthropologist Studs Terkel— with whom he worked at the Chicago Historical Society— as well as personal documentarian Robb Moss and Iraqi blogger Salam Pax, Alshaibi just wants to make “an honest movie,” he says. “Everything’s propaganda, but at least I can show the complexity of this and expose what’s happening. And I’m not afraid to do it,” he says. “For so long, everything terrified me: I thought I’d be kidnapped by the Baathists and sent to war, or be assassinated, or deported, or locked up here. But I know how the law works. And I’m not afraid anymore.”