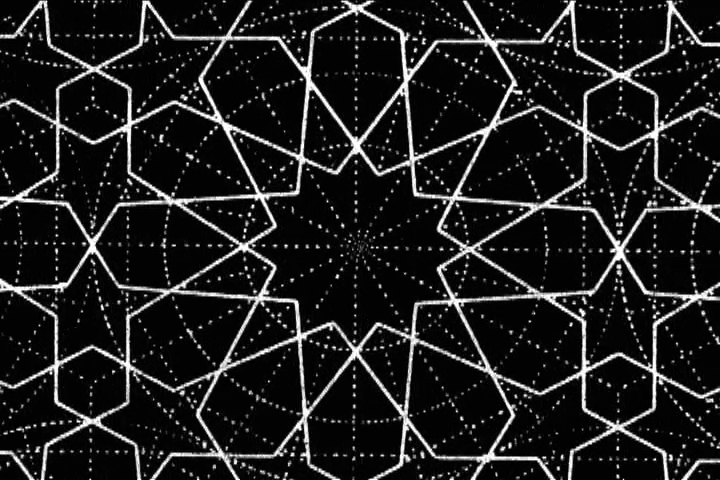 Allahu Akbar is based on ancient Islamic Allover patterns that are used for various artistic ornamentation in Arab culture. In Islam it is forbidden to have depiction’s of God or the Prophet. Complex geometrical patterns are used to praise the perfection of God in nature. My Father came to visit me from the Middle East and brought me a book of these hand drawn Islamic patterns. These beautiful and intricate designs were on this brown newsprint, it looked like a book a craft-person would use, almost like a blueprint. I took these images, scanned them, cleaned them up and started animating them. I began to spin and move these Allover patterns in post-editing motion tools. New images emerged and created an entirely different way of viewing these traditionally static designs. Allahu Akbar attempts to come closer to that ultimate beauty and mystery-UA.

“…shimmying geometries celebrate the liberation from image making.” –From Aniconism to Bliss: Media art shows its Islamic roots, Pacific Cinematheque,Vancouver, September 20, 2010.  This program is presented in conjunction with the launch of Laura U. Marks’s book Enfoldment and Infinity: An Islamic Genealogy of New Media Art (MIT Press, 2010)

“In Allahu Akbar, the US based filmmaker Usama Alshaibi has created joyful and playful animations out of the traditional geometric themes of Islamic art. These complex geometries are rendered in simple black and white, and then superimposed and spun around their central axis, in a close rhythmic relationship with the lively soundtrack of traditional and popular Iraqi music. The result is a giddy playfulness, reminiscent of psychedelic Pop Art, and far removed from the contemplative quiet I normally associate with Mosques and the inner courtyards of traditional Arab architecture. The video also recalls the films of Harry Smith. My only complaint is that, for a person like me who really loves this music, I could have watched a much longer film which used at least one complete musical selection!”-RESISTANCE(S) DVD Review by David Finkelstein (Film Threat 2006)

Allahu Akbar is also available on ‘RESISTANCE[S]: Experimental films from the Middle East and North Africa and is on a global tour to promote the DVD. For more information go to: lowave.com

Exhibitions and Screenings
Sur le motif” (“On the Pattern”) at the Center d’art Madeleine-Lambert in Vénissieux, France, from December 17, 2022 to February 25, 2023

From Aniconism to Bliss: Media art shows its Islamic roots, By Laura U. Marks coincides with the publication of her book Enfoldment and Infinity: An Islamic Genealogy of New Media Art. DIM Cinema, Pacific Cinematheque Theatre (2010)

Kratkofil festival in Bosnia-Herzegovina, Bibliotheca Alexandrina in Alexandria, Egypt, Tunis, Tunisia, with the ‘El Teatro’ group, and in Nouakchott in Mauritania with ‘La Maison Des Cineastes’ (2009)