“A deeply felt journey into psychosexual horror“-Time Out Boston

“Profane is an extraordinary visionary work from an accomplished filmmaker who is clearly now at the top of his game.” –Underground Film Journal

“There’s a cinematic mastery lying at the very core of Profane.” –The Independent Film Critic

“Like a bargain-basement version of Gaspar Noé’s Enter the Void, this Chicago-shot feature by Usama Alshaibi (Nice Bombs) uses a panoply of shock tactics—rapid editing, blurry superimpositions, drug use, and S-M—to evoke nauseous fascination with the sexual underworld. And like Noé, Alshaibi seems as curious about religious transcendence as degradation. The heroine, a Jordanian immigrant, works contentedly as a dominatrix but wants to reconnect with her Muslim roots; scenes of her lurid career alternate with a sweet subplot in which she befriends a religiously devout Middle Eastern cabdriver. Though certainly not for the squeamish, the movie is a striking story of life in the Arab diaspora, aided rather than undermined by its occasional narrative incoherence.” — Chicago Reader

We stay with Muna throughout her pro-domme sessions, her tenuous friendship with a cabdriver named Ali, who attempts to reconnect her to the culture with which she has lost touch, and her libertine friend Mary, who brings Muna’s rebellious nature to the surface. We follow her through a maze of indulgence and excess in the hopes that she will find the sense of self that has been eluding her during her extended life in the States.

Renowned underground filmmaker Usama Alshaibi pulls no punches in his first film to grace BUFF screens since 2004. With its sado-masochistic eroticism juxtaposed with traditional Islamic imagery, it would be easy to dismiss Profane as anti-religious agit-prop. But Alshaibi invests so much depth in his main character, and so much lurks beneath the surface of his sometimes shocking setpieces, that it is easy to see that Profane is an intensely personal experience for its author. Known equally for his non-fiction filmmaking as he is for his contribution to transgressive cinema, Alshaibi applies his skills as a documentarian to this psycho-sexual horror story of one woman’s struggle with her identity and the culture clash between Middle Eastern mythology and Western pop culture”. — Kevin Monahan from Boston Underground Film Festival 2011 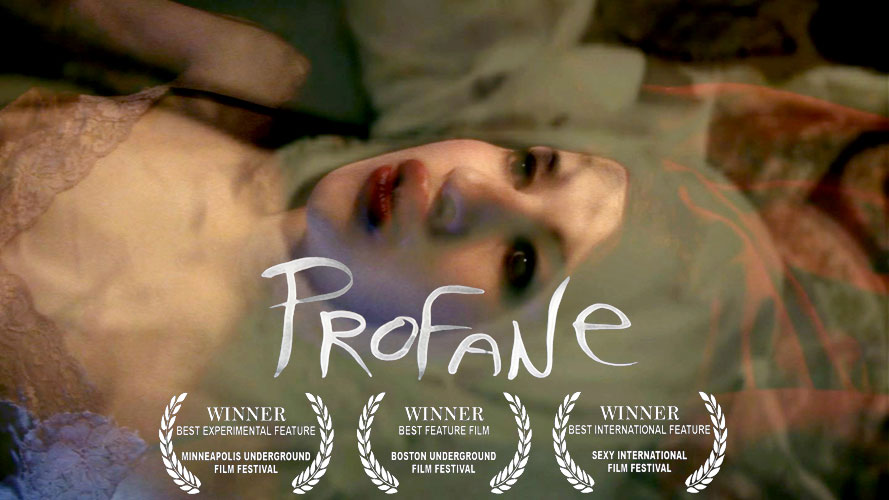